of cakes, ladoos and sewaiyan 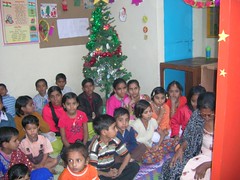 Xmas was celebrated in earnest at the women centre. There was a tree, streamers, stars and bells, pictures of Santa drawn by the kids and much merriment. There was home baked Xmas cake and presents for all.

Sophie who had planned the party made a little speech explaining what Xmas was and how it was celebrated y children in our country. I was designated to translate and began by asking the kids whether they knew what Xmas was. Most of the children at the women centre belong to poor Muslim families and rarely go beyond the streets of Madanpur Khader where shops are not decorated for Xmas and do not sell Xmas ware and hence the answer to my query was a barely audible no accompanied y a vigorous shaking of the head!

Links had to be made so I asked about Eid and then Diwali and everyone nodded and smiled and went on to say that Xmas was just like those days for people who went to church instead of temples and mosques, all homes of God. When I asked what kids ate on Eid and Diwali, pat came the answer: ladoos and sewaiyan, so cake it was for Xmas and the link was made. Xmas became something familiar and comprehensible: it was simply a matter of replacing cakes with ladoos or sewaiyan!