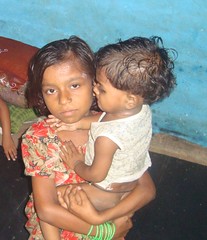 After more than ten years of working with the less privileged, I often think I have seen it all and am now inured to things. But that is not quite so. Yesterday we went to Manisha‘s home to talk to her mom about her going to boarding school. Yes you rad right our little Alien is off to boarding school sooner than we thought! We had hoped to catch her mom at lunch time but that was not to be as she was still out picking rags and was not expected till late afternoon. However the little home was not left unattended as Sonu, Manisha’s elder sister, was in charge. She is just eight years old.

Sonu welcomed us with a serious smile and asked us to sit down. We did and looked around. 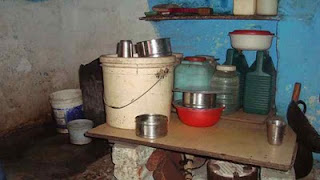 Manisha’s home is not bigger than a store room and yet what struck us was that it was spotlessly clean and well organised. Everything seemed to have a place be it the little school bags in one corner or the mom’s sarees that hung in another. A tiny plank set on two bricks in the third corner was the kitchen and well organised. To beat the incredible heat a table fan was tied to the wooden beam that held the low tin roof of the house in place. One could see that in spite of all odds Manisha’s mom had tried to give the best she could to her children. I cannot find the words to describe what we felt: awe, respect, bewilderment laced with anger and even helplessness. This was the world of the survivor, one we could only salute.

We sat a while talking to Sonu. She told us she was very happy Manisha would be going to a big school and then little a true little mommy she turned to Manisha and told her quietly in a tone way beyond her years: you must study hard and do well! We asked her whether she too would like to go to school and again she relied with a wise smile: how can I, who will look after the baby, she does not stay without me. Those simple words summed up the plight of so many little girls across India. Here was a little girl, one who should still be playing with dolls, who had become an adult overnight. If she did not look after the home, the mother would not be able to earn and no one would survive. She knew it and what was killing was that there was no resentment or bitterness in the girl, it was simply her life.

As I said I thought I had seen it all but this little girl moved me beyond words and was a stark reminder of how little we had achieved and how much more needed to be done.