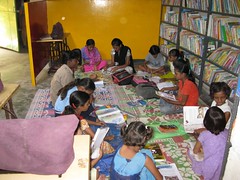 Megha visited the women centre some time back. She needed to write a blurb for potential donors. This is what she wrote:

Situated among the squalid gallis of Madanpur Khader village in South Delhi is located the Women’s Centre; one of the 13 centers operated by our project in the slums of New Delhi.

Unlike other centres of the project, this one is self contained in several ways. Led by Dharmendra, a man as charismatic as his film-star namesake, this centre has after school education programs for children from 1 – 8 standard, sewing and beautician courses for young women, a computer centre and a small apartment complex complete with kitchen for battered or abandoned women.

As I visited the centre, narrowly missing being swooshed in the face by a buffalo’s tail, it was a relief to step into the neat library space of the women’s centre. Young women were busy learning how to sow in a straight line, the creche was wrapping up and Meher, a child who fell into boiling hot water was being nursed after her plastic surgery to open the digits on her hands.

Dharmendra-ji invited us into his small office, offered a cup of tea and spoke about the previous year. Each time I meet him his stories amaze me; mostly because of the innovative solutions he finds to most mundane problems. The Centre opened about a year ago and one of the fastest growing aspects has been library usage. This was so popular with the children that Dharmendra-ji kept it open on Sundays, effectively giving himself a 7 day work week.

A few months ago, some books went missing. Dharmendra-ji had an idea who had stolen them but did not want to embarrass the child in front of his peers so he declared that no-one would have access to the library unless the books returned. Upset that they may not be able to use the library, the children then took initiative to organize themselves into vigilant squads. Bags were searched; entry and exists carefully monitored. And just like that, a few days later the books returned. Dharmendra-ji created a situation where the children valued a service enough that maintaining it gave them pride; so now, its the children who manage the lending and reading activities in the library giving themselves ownership of this service.

Overall, this centre is so popular that he now keeps a waiting list for students wishing to join the after school program. This is what you donor money is doing right now – quenching children’s thirst for education in a safe and loving environment!