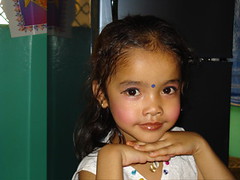 Some of you know Kiran. She has been part of pwhy since its very inception. She was actually born the day we began our work in Giri Nagar.

Kiran is a lovely child in more ways than one, and she is an extremely sensitive and humane person. Her favourite place at pwhy is the special section where she often spends time helping the teachers with their work and interacts with each and every child. The picture you see is when she lent her face for a make up class and sat a long time while Neha, Rinky and Shaheeda set to task.

Her family has always wanted the best for her and dreamt of putting her in a nice school. They were willing to pay a reasonable amount and had saved for it. When she was ready for class I they set about finding a school but soon found it was not so simple. Kiran had been to a playschool where she excelled but that was not enough. Tests ensued and the dreaded rejection that this intelligent child could not understand.

Her admission became a topic of daily conversations in her little home till the day one well wisher (or so called) stepped in and said he could get her a seat in a school. Kiran sat for the entrance test and got in. Her fees and other expenses – a whooping 15 K – were paid as everyone scrapped the barrel. Last week in her new uniform little Kiran set off to school. The same afternoon the well wisher – a true Shylock – asked his pound of flesh: 20 K commission!

Kiran’s story is shared here to underline a larger issue. What many do not realise is that this is the trend not the exception. More and more parents from what we like to call the underprivileged class are wanting to send their children to good schools. This is because the government run schools, particularly at the primary level are in an appalling state. Parents who are now second generation migrants to Delhi and respectable citizens with voting rights, are aware of this reality. The private schools or rather teaching shops that proliferate in slum areas have also been exposed as a costly and poor option. Parents want a good +2 school.

We have witnessed in the past years many parents from slums trying to get an admission for their children. This is often the case when one parent is educated. For many the search is futile and the child sent to a private unrecognised school, for others like Kiran things look possible till the hammer falls.

The child is now in school. If the money is not paid there is a likelihood of her being poorly treated or even dismissed. If the racket is exposed then the child will be ill treated for sure and finding another school is almost impossible. Paying the money is not an option as not only does the family not have the resources, but they are reluctant to walk this road.

Kiran’s story is the story of many children in today’s reality. I am a die hard believer in the common school system where children from many walks of life will learn together. But the writing on the wall points in a different direction as one hears more disturbing trends on privatisation of schools. Many do not realise that it will ring the death knell for a large chunk of India’s young population. 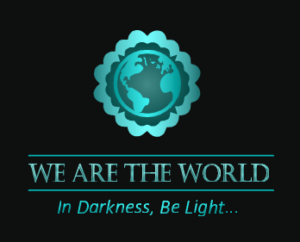