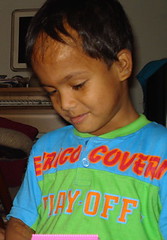 Blowin in the wind.. revisited How many times must up a man loop up, before he can see the sky, wrote Bob Dylan way back in the sixties in his legendary song: Blowin in the wind, an ode to all the unanswered questions that dot our lives.

Today I am reminded of this poignant words as I watch Utpal packing his little red bag for yet another uncharted journey. Like all school going children Utpal is on summer vacation and will in a few hours make a short trip that will take him to his mother. But this time the mother and child reunion will be in a different place altogether. Utpal is going to spend a month with his mom in the rehab centre where she has checked in subsequent to her recent setback.

It was just a year back that I had walked the hot lanes of a crowded market to find the little red bag that now once again sits in he hallway and that was to carry Utpal’s things to his new boarding school. At that moment I could not have imagined the numerous times it would have to be packed to accompany this remarkable child to various destinations and wonder how many more are yet to come.

When I look back at Utpal’s five tiny years packed with so much pain and strife, I wonder how much more will he have to endure. The answer, I guess, is just blowin’ in the wind. 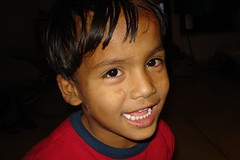 Utpal came home for a few hours on Sunday. It was the last Sunday of the month and normally one should have made the trip to his school and shared his lunch of beans and rice but the extreme heat made me change plans and have him come over instead.

We spent the morning preparing his favourite food and bought all the goodies he likes and is not allowed in school: the fizzy drinks, the spicy chips as well as a lot of fruit. Some of his toys were brought down from the attic and the cooler was switched on. The excitement was palpable as we all waited for him.

he came by at 1pm and at first stood shyly but moments later he was his adorable self and reclaimed his proprietary rights. He opened the fridge and took out some oranges. Son the house come alive with his laughter and endless prattle. All his extended family was there and he played to the gallery ensuring that no one felt left out.

The day flew by and soon it was time to leave. His face did fall a little and my heart missed several beats as it does each time I have to let my popples go. The proverbial coward, my pace slacked a little as he started to leave the house. He looked at me with his huge melting eyes and said : bahar tak too ajaho ( at least come till the gate).

I did sheepishly and with moist eyes… 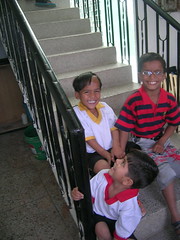 smiles to die for This is a sneak picture.. it was not a PTA day. Dharmendra had gone to Goyla to meet Utpal’s school principal and while he was waiting for him, he managed to get a glimpse of Popples surreptitiously.

This picture will set to rest the minds of all the die hard Mr P fans who may think he is unhappy in school. This snap was taken post lunch on the way to rest time and the huge smiles on our little gang of three say it all.

It speaks volumes for the school as it opened its doors and heart to a child that fitted no mould and enabled him to find his place. Today Utpal has been promoted to the next class. He has his set of pals and is on the way of carving out his future on his own.

Kudos to this little braveheart who has fought many odds in his tiny life.

planet why – hope and believe

When a package enclosing two healing stones marked ‘hope’ and ‘believe’ landed on my table after travelling an incredible 12 000 km all the way from Ontario, I knew something huge was about to happen in the existence of project why.

The stones were actually meant for Utpal to be in my custody till he graduated from grade and high school, but somehow for the very first time I did not feel guilty when I unabashedly asked my friend North whether i could keep them. Needless to say she agreed.

I must confess that at that time I was confused and worried about the future of project why as one was faced with the indubitable reality of a metro line looming large and heralding the relocation of the slums we work in, and the bleak future of the handful of children of a lesser God whose only hope lay in our hands.

I usually do not sink into despair but I was close to that as one also knew that some supporters were also tiring of the comfort zone we seemed to be sinking into. The sight of those two stones somehow lifted me to a new high and I found myself planning the impossible: planet why. Nothing seemed to large, or to big. It just seemed to be the obvious way to go.

In just under a week a plan had been formulated and friends sounded and the response was amazing. As I write these words a piece of land has been identified and the initial budget is being worked on and I know that planet why is on the way to becoming a reality.

It will be known as planet why – hope and believe! 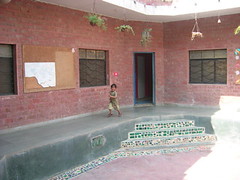 Life is a strange and fascinating journey. It is said that when a child is born his brain has the possibility of learning anything he is taught. After that begins a selective process that mirrors the child’s environment and hence appears the choice of language, likes and dislikes and so on. many of the choices we make are either akin to those of our caretakers, others stem from our rebellious nature and are the exact opposite of what we see.

As the journey continues new choices come by and many course corrections too, but some things remain embedded in your mind even though you do not quite know why.

Many years back when I was in high school one of my teachers gave me a present: it was a copy of the Little Prince of St Exupery. At that time it was just a book that touched me but somehow I had the intuitive feeling that it was to be much more.

Life took on many turns but somehow this book never left me and I found myself going back to it at times when I needed answers to seemingly incomprehensible problems. Exactly 4 years ago when a scalded Utpal landed into my life I caught myself thinking of him as the little Prince who landed from nowhere into a lost aviator’s existence.

For the last four years Utpal and I have made a long journey as he led me to places I would have never gone to were it not for him. With him I visited many planets just like the aviator did, some nice some not so nice. From the hell hole of the life of an alkie woman in an urban slum, to the crisp and refreshing air of a quaint boarding school, from the forbidding and cold precincts of a rehab centre to the laughter and hope filled surroundings of an a idyllic sanctuary, via toy shops with the best deals, and sinful fast food joints.

Like the Little Prince of St Exupery, I too encountered rares species: some funny, some sordid and some filled with hope and came across realities that my half a century on this planet had not prepared me for. I was faced with many challenges, some seemingly insurmountable but his little hand always held mine nudging me not to give up. And as I travelled with new eyes on uncharted courses I knew my little man was the bearer of some deep message that went beyond the realm of his life.

Over the years I had often found myself referring to project why as planet why, and then correcting myself as the raggle taggle elements that make project why could not be named a planet. Some Freudian slip or an intuitive glimpse of what still lay ahead. Any one’s guess. Yet hindsight shows that a tiny seed was being planted in one’s mind. Project why in its actual avatar was too fragile and had to take on a new body. The travels with my prince were just pointers towards the task that lay ahead: creating planet why that would come full circle.

And once again an apparently impossible picture seeded in my mind: that of a happy place where those with no hope could seek not only refuge but find meaning, where no one’s children would study just like others, where skills would be taught, where days and would filled with laughter and happiness and childhoods would be reconquered with renewed assurance watched by my smiling little prince.

So help me God! 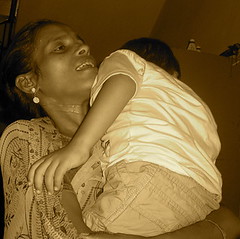 A mother’s arms are made of tenderness and children sleep soundly in them wrote victor Hugo and yesterday after on whole year Utpal must have slept soundly.

It has been a long solitary journey for utpal and his mom, but they are both survivors.

It was also the first time in that the now legendary motley crowd that goes by the name of Utpal’s parents was not there to fetch him. trusted Dharmendra bhaiyya was given the task of picking up utpal and delivering him and the little red bag to the portals of karm marg. Imagine my panic when I received a call telling me that the whole karm marg was away on a field trip and only the ducks, the dogs nd a three staff members were there. My immediate reaction was to ask that Utpal come back to me, but he knew that something special was to happen and once again acted with wisdom beyond his age as he befriended those present and told Dharmendra bhaiyya to leave.

Later a bag was delivered to my home. It contained Utpal’s school clothes, his uniform and winter wear. I just held on to each that little bit longer as I emptied the bag missing his smile and babble.

As I write these words I do not know how the mother and child reunion went. I just foolishly spent the night kicking myself for not having put a sweater his bag.