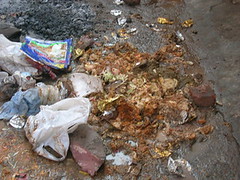 This is a picture of the morning after a wedding party in our street. Yesterday as is customary in our city, tents came up, the street was blocked and the paraphernalia needed, set in place.

This morning we saw the aftermath: large quantities of wasted food, and mounds of plastic ware.

The venue: gali no 3 govindpuri.

Such sites are so common in the densely populated areas of our cities and in the many urban slums that we have become inured to them. But today the site of so much wasted food was extremely disturbing for was it not just a week ago that a TV channel ran a series of programmes on hunger in India. The startling figures came to mind: of the 16 crore of children under six, 6 crore live below the poverty line!

We have all been to wedding parties and witnessed wastage of sorts. But somehow the site of large quantities of food lying on the street was unsettling. Food has always been respected in India and even deified. To see it walked upon and trampled was almost blasphemous and raised many questions.

What made normally god fearing and tradition abiding people act with such disregard? Normally in rural India, wastage is negligible if not non-existent. Even peelings are fed to the domestic cattle or left in a safe place for birds. What was even ore perturbing was that this was not happening in the shining India, but on the other side of the fence, one where people still live in want and debt.

Does the journey from village to city make one lose so much; does the label of urban entail adopting all urban ways, even the bad ones? And above all how does one instill in children born in urban slums lost values when what they see is the exact opposite?

Young children are endowed with an intuitive common sense that is unfortunately lost down growing up lane. Young Kiran, age 6, was with me when we took this picture. Her quiet words echoed my feelings when she simply stated: why did they not give this food to the cows.

Yes little girl, to the cows or to one of the million of children that sleep hungry every night.