It has been a long time since I wrote this time not for want of thoughts to be shared but rather because of an onslaught of emotions that needed to be processed to make any sense at all. All this was further compounded by the blues that sets in each time a year ends, more when you are well entrenched in the last mile of your existence when time is no more your friend and seems to run at a new found speed. Probably it is that very thought that propelled me to pic up my virtual pen again.

Today let us talk miracles. Yes about these ‘occurrences’ that happen everyday should you allow yourself to look with your heart. The reason I feel the need to do so is because lately I seem to have been the one who relied too much on my eyes. It seems a human failure to rush to the dark side when faced with adversity. All lessons seems forgotten even the one learnt at a father’s knee when things were bad and the loving parent told you about the big picture that one could never see in its totality. It is sad that all it takes is a small hiccough to wipe away wisdom. 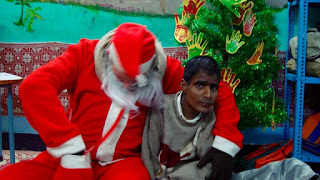 As I browsed project why pictures yesterday – something I often do when I need a lift – I stumbled upon this picture of Manu and Father Xmas. It took me back several years to the time when a young passionate German volunteer decided to be Santa for our kids. Seeing Manu and Santa together was nothing short of an epiphany as I suddenly realised that Manu was my very own Santa who had come into my life one fine morning with an invisible bag of miracles he handed out when the moment was ripe, and this year after year till the day when five years ago he left us quietly. His time had come. But had mine? True I knew that the only way to repay the debt I owed him was to carry on, but here again I relied on my eyes forgetting the heart.

The last year has been a merciless one. Few know how difficult it has been to keep our doors open but closing was no option and we soldiered on as every time we reached the brink, someone threw us a plank! How did I not realise that it was yet another miracle from Manu’s invisible bag. All it took was to open the eyes of my heart. 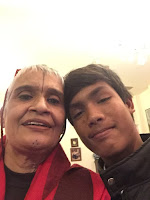 The past few months have been filled with Angels and Miracles. True they did not having wings and did not descend from the heavens above, but came in different shapes and sizes and from across continents. I thank them all from the depth of my now wide open heart. I feel humbled and blessed.

Yes miracles happen everyday. They are the hands that reach out to you when the need arises, the mark sheet held with pride, the hug you never asked for and the selfie taken with someone now as tall as you but that once was a little scalded bundle swathed in bandages his eyes filled with pain. Who says miracles do not exist; look with your heart and you will be amazed.