a huge moment at pwhy 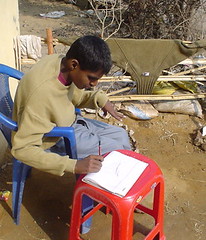 Manu, a young physically and mentally challenged young man lived on the street, neglected, dirty and soiled. People would feed him but like you feed an animal. Children threw stones at him. His family abused him in all conceivable ways. No one touched him, when things became too much he would let out the most heart wrenching cries.
We knew we had to do something and after exploring all options we realised we had to give him back his dignity within his community. To do this, we had to gain the confidence of the community and that is why we opened our centre. We looked after Manu, cleaned him, found him a place to sleep and slowly began to get to know him, love him and discover his humane qualities. Slowly he learned to look after himself, to eat with a spoon and to spend time in the centre and even participated in vocational activities. And as days went by, not only we, but the very people who had shunned him began to discover Manu.

These words appeared on our website way back in 2001. I looked through the thousands of pictures that document project for a photograph of Manu’s as he was then and find none. Somehow it felt wrong to snap such despair, no one had the right to do so.

Today Manu is an integral part of our special section where he has his pals. He participates in all activities be it cooking or classroom work; he loves dancing and has reclaimed the right to assert his likes and dislikes, like any one of us.

We had come a long way but we still needed to establish his social identity and give him his civic rights. Has family of course had abandoned him, denying him even his right share after his father’s demise. Getting him one seemed an impossible catch 22 situation: to get a handicap certificate you need a ration card, to get a ration card you need a permanent address and so on.

But there was one thing we could get him: a bank account under the guardianship of our organisation. So yesterday Manu had his first ID picture taken. What a huge moment it was for all of us as he set out to get that picture taken.

In the course of the week we will open his account. Even I who have is by now a firm believer in miracles feel a little dizzy as I look back at the road Manu has travelled.

PS: unfortunately by the time we got to the bank the rules had changed and our letter did not suffice and Manu’s account could not be opened.