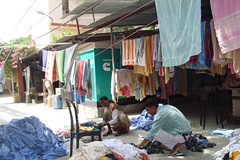 Utpal loves taking pictures. Every time I go to his school he takes my camera and shoots to his heart’s content. He did just that last week during his PTM. He took pictures of his pals, his bed, his favourite teachers and more. Then he handed me back the camera and set out to play. Some time later he came back to me and asked for the camera again declaring that he had to take pictures of the laundry. I must confess I was a little perplexed but did hand him the camera. He set off again and took the shots he wanted.

It is only when I downloaded the pictures that I realised he had taken pictures of the washermen as they worked. I was deeply touched as such people often remain invisible as we simply take them for granted. And yet here was this incredible child who ensured that they too become visible and recognised. A lesson for all. But then Utpal knows how to see with his little big heart!