the roads are houseful 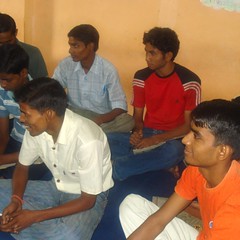 Today, I was treated to one of my best moments at pwhy. The day began normally and nothing would have prepared me for what was to come. As I was about to leave the office I asked my colleagues what was their plan for the day and they answered that they were going to the senior secondary section as the students were having an English Debate competition. I must confess I was a tad vexed at not having been invited but I said nothing and went my way.

As luck would have it an appointment got canceled and I found myself with time on my hands and decided to make my way to the senior secondary and be part of the debate. I do not know whether my move was apreciated but everyone played by the book and I was greeted with warmth by all. A dozen boys were in the class room and just one girl. The students were mostly from class XII, XI, X and IX. Some time later three girls joined the group. Though initially a debate had been planned, Gunjan the English teacher sprung a surprise on his nervous wards. Everyone was to chose a topic and speak for at least a minute. The new dictate was met with bewildered looks, nervous glances and uncomfortable stances but the teacher was relentless. After brief introductions it was time for the first speaker to address the audience.

The next hour was an absolute delight in more ways than one. The topic selected by the students were varied and showed a great deal of maturity and wisdom. Child marriage, dowry menace, terrorism, education, environment, importance of doctors were some of the chosen topics. Some spoke with confidence, some with some hesitation but each one stood proudly in front of an audience where some were outsiders and shared their dreams, hopes, fears and aspirations in a language they were learning to master. I must confess that for once the boys outdid the girls.

Young Ravi who bagged the coveted first price took my breath away. He chose an unexpected and somewhat trite topic – traffic – and in 1.50 seconds painted a socio-economic canvas of today’s India. Ravi’s English would be considered by many as wanting, his construction faulty and his grammar poor but he managed to convey everything he set out to, vindicating my firm belief that language is a communication tool and should be viewed as such.

Ravi’s speech was a delight. He used stunning metaphors and images to convey what he wanted. The one that bowled me over was: the roads are houseful – to convey the state of traffic on Delhi roads. In his nascent English, Ravi talked about the misplaced egos of Indians where families had not one, not two but four cars! He talked of the car companies always coming up with bigger and newer models to tempt consumers. He mentioned increased pollution and subsequent health hazards. He even touched upon the apocalyptic scenario that waits us with the arrival the low cost Nano that would make roads even more houseful! He even highlighted the fact that in other countries people were content with two cars per family. He ended by saying that he walked the talk as he had neither car nor bike. What a stunning little speech it was, delivered with passion and aplomb.

Everyone shared their views with sensitivity. It was a moving moment as I sat and listened to the hopes and fears, the likes and dislikes of these wonderful and yet forsaken children of India. Here they were rearing to go but we had assured that they would run the race of life with tied hands. The education doled out to them was nothing short of mediocre, one that even with the best effort would never enable them to win the race.

And yet as I watched them, all I saw was winners who had beaten all odds and were determined to break glass and lead ceilings and it accrued to us at pwhy to help them do so. It was also a proud moment as many of those who stood in front for me were toppers in their schools thanks to the efforts of our precious teacher Naresh. While introducing themselves they had also shared what they wanted to be: math teachers, chartered accountants, computer engineers, pilots, were some of their aspirations.

I left the room with a silent prayer to the God of Lesser Beings, entrusting these precious dreams to his care.