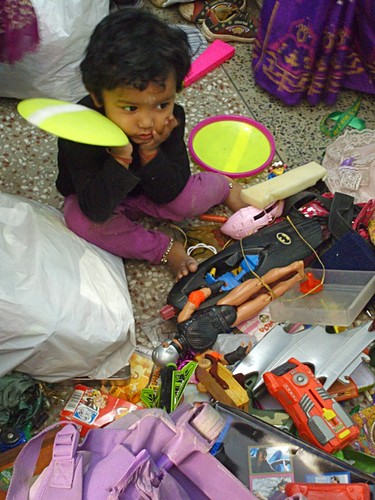 “The fragrance always stays in the hand that gives the rose. ” wrote the 17 century British poet Hada Bejar
I do not know whether I am livid, desolate or have just become inured to whatever comes my way. I do not think so as each time I come across an incident like the one that happened yesterday my blood boils and then curdles. Over the past years I have often vented my anger when faced with situations that demean the very act of giving.

Let me end the suspense. Here is what happened: last week I got a phone call from a well to do up market lady who lives in one of the poshest colony of our city. She asked me to send someone as she had things to donate for the children. In spite of having been bitten many times, specially when the so called donor is from a particular strata of society, we promptly sent one of our three wheelers to the lady’s home. He came back some time later with over a dozen plastic bags of all sizes stuffed with things. The bags were deposited on our terrace waiting to be emptied.

Jenine and Nina two volunteers from Canada and the US and some of our staff were given the task of sorting things so that they could be handed over. It did not take long to realise that what had been sent to us as donation was a heap of rubbish: dirty and torn clothes, broken toys – half a Barbie doll, half a chess board etc – dusty and stained lampshades, broken shoes and even stained and tattered undergarments. It was a nightmare to sort things out. At the end of it all there was not one article that could be put to use. Even the kabariwalla (recycle man) called later refused to pick anything up!

Needless to say that the volunteers were shocked beyond words and our staff members angry and even humiliated. The question on every one’s lips was: How dare she….

Charity as one sees it today is often nothing short of galling. I often wonder what the real motivation is: a topic to discuss at the next kitty party in the hope of getting a pat in the back, a desire to be written about on page 3, a way to ease ones’ conscience, or simply a way of getting rid of the rubbish no one else wants. I wonder how the lady in question set about collecting the items she sent us. Did she just ask all in her family to set aside what they wanted to get rid off, or simply did a long overdue spring cleaning. I do not know, but what really riles me is that she could for even a second think that what she was sending could be used by anyone!

I guess I will never learn. A few years back a bunch of ladies belonging to a respectable and even elite international club decided to donate us toys. These came beautifully wrapped and were handed over with great drama. After the ladies left we opened the packets and were shocked to see that all the toys and games were not only used but broken and incomplete. When I brought this to the notice of the convener she simply said: what difference does it make, it is only for a poor child! Needles to say that I returned all of them.

Are there any lessons to be learnt? I do not know. What I do know is that not a single of the slum people I work with would have the audacity to give any broken or dirty article to another human being. So what makes this and other ladies do such a thing. And there we once again reach the realm of the two Indias. Is it that they truly believe that the so called poor will accept anything with gratitude, that they have no right to feel humiliated or angered. Have values like compassion and generosity completely disappeared from the lives of the rich and affluent. Do they not realise that in acting in such away it is they that look poor and pitiable as in Bejar’s words the fragrance stays in the hand that gives.