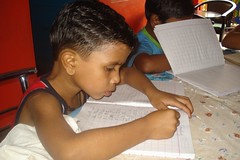 There is a new buzz in town: teach India, the latest campaign by a leading newspaper group. Larger than life posters, glitzy TV ads, Bollywood brand ambassadors, a dynamic website, heart rendering memories: the stage is set to make India literate, or so the well designed and implemented campaign would want us to believe. As an NGO who has been in the teaching business for almost a decade we qualified as partners and I received the concept note of the campaign.

Amongst other things the teach India wants to : Inspire, motivate and mobilize people to volunteer for education and be more socially active citizens and build a more cohesive and inclusive society based on trust and reciprocity through bridging people from different backgrounds in order to fight discrimination and marginalization. Is this not what many of us have been wanting and trying to achieve for a long long time.

The campaign like every other media campaign is short: 3 months, at the end of which a monitoring process will begin to check the impact of the classes and the efficacy of the program. Wow, wish things would be that easy.

My mind went back a few years to the time when we too at pwhy had tried to inspire, motivate, mobilize people to be more socially active. I remembered the day when after having been in the glare another media campaign, replete with glitzy ads, Bollywood stars et al, I had sought help for our just one rupee campaign, where we did not ask for two hours of any one’s time, but just a simple rupee a day to teach India! The fact, as I realised just a few minutes ago, that I have even removed the campaign form our website, speaks for itself. The idea failed, no one was mobilised, inspired or motivated. A handful did come forward but the impact of such an option could only be felt if it withstood the test of time and became part of one’s life, almost like an old and bad habit!

For months I tried to flog the dead horse but soon realised it was mission impossible. I did many a post mortem but must admit could not find one valid reason that perhaps could have been addressed. There were many: people got bored and tired of one cause and wanted new ones; people preferred spending their money to help dramatic and heart rendering causes: a heart surgery, a tsunami…or simply coming with packets of food and feeding poor kids! Things had to be visible and the only visibility one could proffer were pictures of kids learning, exams results or some passionate blogs. Not enough to keep them interested and have them make the effort to remember the next month’s or year’s cheque. I had failed to motivated, inspire, mobilise people to give a simple coin, one that would not even been missed.

Soon the just one rupee a day dream was set to rest without much ado. But the teach India campaign bought it all to the fore and for more reasons than one. If India is to change for the better we all have to accept and assume our part of responsibility and cannot simply hope that government policies and a handful of committed NGOs will do the magic. And though the teach India campaign has all the right ingredients for success why is it that I feel that it will just wane away after the blitz is over. Am I simply getting jaded and tired.

It would be terribly unfair to a bunch of people from different walks of life if I ended my post here leaving all and sundry to believe that no one can get mobilised, motivated, inspired. We have been in the teach India business for almost ten long and exciting years and can boast of great track record (no failures in school, good results in Boards, kids gainfully and well employed) and this is because we managed to find, mobilise, inspire, motivate a great bunch of human beings that form what we proudly call the project why team! We did not have media campaigns, Bollywood stars or any such drama, we simply spoke to their hearts. Our teachers do not have swanky degrees or MNC jobs. They are simple Indians with a few years of schooling and loads of common sense. They belong to the strata we normally fail to acknowledge and often pass by. They are rich in commitment and goodwill and give themselves wholeheartedly to the work entrusted to them. And boy they do it well. To them all I can say is chapeau bas!

Over the past years they have been helped by another bunch of rare beings that go by the name of volunteers. They come form faraway lands: Singapore, France, the US an UK, Italy, Germany, Holland and other lands. They come from famed Universities and Business Schools. They are your would be honchos. They brave the heat, the stench, the mosquitoes and the spicy food and spend what is often their holidays teaching India. They do not need media campaigns to motivate, inspire or mobilise them: they simply follow their heart. To them again chapeau bas!

Teach India is undoubtedly a brave campaign which we would want to believe has been launched for all the right reasons. Its success depends on each one of us and our ability to carry on after the limelight has faded away.

You can see how we at pwhy teach India by flicking through these pictures.