not a fairy tale 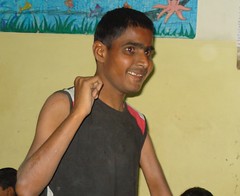 Once upon a time there was a young man named Manu. The Gods had not been kind to him as he was sent to earth almost 40 years ago with a fractured mind and a wobbly body. His mom like all moms did tend to this odd child with care and love and he spend his early years in security.

But the Gods intervened again and took his mother away. Manu was left to the care of two small sisters who did show him some compassion. But as all young boys he too wanted to discover the world and venture out of the four walls of his tiny dark hovel.

True the sun was bright, the winds soothing and the roads full of new things waiting to be stumbled upon. But Manu did not know that he did not look like others as he crawled on his useless legs and did not understand that beyond the sun, the wind and all natures bounty existed people who were never kind to anyone who did not look like them. But Manu’s spirit was indomitable and he set out to find out what life was.

Soon his sisters got married and the little love that could heal the day’s scorn disappeared. In its place came a daunting sister-in-law whose bards were worse than those he had to bear with. The one safe walls became threatening and Manu started spending his night roaming the streets. His drunk dad had no time for him. His clothes got tattered, his hair unruly, and is body infested with wounds. Kids threw stones at him just to hear him scream, car drivers revelled in scaring him and sometimes hit him.

Sometimes a kind soul would hurl abuses at the family and Manu was given a bath and his head was shaved. Poeple fed him as you would an animal, if we got too hungry he would rummage through garbage dumps. People would shun him. His sister in law would send him to beg at the local temple and promptly appropriate the few coins that would be in his torn pocket. Everyone would commiserate on is miserable plight and wish him to die wondering what sin he must have committed for such a life.

But he soldiered on, weathering all storms, spending nights in the bitter cold, lying alone after a severe epileptic fit, dehydrated under the scorching sun, bearing all abuse and not giving up life as if he knew that it was not yet over and that something would happen the next day. God ways are mysterious and he had a plan for him. Manu the seemingly useless, pathetic, forsaken soul had his own mission, one that still needed to be unravelled and though he could not express it, he knew he had to carry on.

Then one day someone came his way and stopped. In his eyes and the beginning of a smile she saw what she was looking for and felt that this was a blessed moment for both of them. In her mind flashed an image: Manu in his own home, having his own bed and living a life of dignity and hope. But the road to that dream was to be a long one. And all along the way many lives would be transformed. Manu’s life changed slowly. And though he was safe during the day, his nights were still spent roaming lonely streets.

Soon he had friends just like him who reached out to him. Warm meals came his way as well as a daily bath. He learnt to dance, to sing, to learn basic skills. He went for outings and birthday parties and even the movies. But the final destination seemed still a chimera. Then some time back the idea of foster care home emerged and it was with incomprehensible fervour that all worked towards its creation.

Two days back Manu had his home. A soft bed, a TV, roomies, caretakers who became pals. Everyone wondered how he would react to this new life so different from the one he had lived for years. But all fears were set aside as he spent his first night sleeping like a baby after having watched TV and eaten a warm meal. Yesterday evening Manu even took charge of his home as he ordered the evening meal of potatoes and rotis, his favourite treat and even asked to call Shamika and tell her what he had done. Like all fairy tales, this one too must end with: and he lived happily forever!

I must confess that after that telephone call, both Shamika and I wept like babies!