It only happens at pwhy 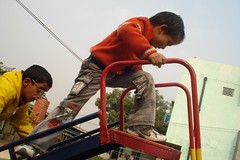 Sunday December 2nd dawned as just another day for many. For a bunch of us it promised to be a special day but none of us could have imagined what it was to be.

At 9.30 am a tempo traveller reached our doorstep to take us to Utpal’s school. Us today was quite a party: there was Kim and Fen who had made a huge detour to come and spend a day with us, Barbara, our lovely senior volunteer who adopted us, Sophie our young volunteer who just came by, and of course our die hards Utpal supporters: Dharmendra, Amit, Kiran and maamji!

At 10. 20 am, we had a rendez vous with our sunshine man and his lovely family who joined the party. A few minutes later we entered the gates of Utpal’s school. My thoughts went back to the time when I had been asked by the school authorities whether someone would attend the monthly PTMs. I knew I would be there – God willing- but never imagined what Utpal’s parents would turn out to be!

Of the many incredible tings that have happened at project why, I feel that utpal’s story eptomises the essence and spirit of project why. This wondrous child has walked into so many hearts and proved beyond doubt that everything is possible if you just learn to look with your heart.

What we did that day would perhaps seem mundane to some: visited the school, watched children play, ambled in the winter sun, drove to a neighborhood market, ate pizza at a mediocre fast food joint, bought a woollen beanie cap, captured some moments on camera… This is how the day seemed when you looked just with your eyes and as my friend the fox from the Little Prince would say you would have missed out the essential.

But if we looked with our heart than the day became different. The tone was set at first by the protagonists of the moment who should not have been together as what do an emiment journalist, a famous photographer, a slum kid, a retired civil servant, a young professional. a business man, a french nurse and an ageing lady have in common. And why should they chose to spend a Sunday attending a PTM! It almost seemed as if St Exupery’s tale had come to life in its XXIst century version with its own little prince who strutted with a swagger as he set upon making each one of us rediscover things his way.

The day was filled with Kodak moments that beat any description. Utpal showed us his new antics as he rolled in the grass and ran up the slide and sashayed across the school. He then had a serious lesson in photography with Fen as he discovered the magic of a profesional camera that he handled with a confidence beyond his years. The mediocre fast food became a gourmet meal and the beanie cap a shopping spree. And the ride in the traveler a magic carpet ride.

When it was time to leave, only I could see the fleeting twitch of sadness in his beautiful eyes as he waved us bye bye. As we drove back in silence, my heart was overflowing with gratitude for all that I had been blessed simply because a little child had walked into my arid heart and allowed it to bloom again.

You can share some of those special moments here