babli … a tiny woman of substance 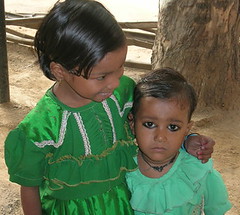 “doctor bolta hai operation karna hai aur paisa ka intezam karlo.. ” (the doctor says I have to be operated upon and that we should get the money organised) said little babli in her shrill and matter of fact voice as she clutched sister arzoo in a maternal hug..

these words spoken by this little chit of a girl for whom even the simple act of breathing is an effort, sums up the attitude I would like to instill into everyone at project why..

Some kid… she is not scared , she just wants this operation out of the way so that she can get on with her life, and her dreams..

babli wants to study and become a ‘police’ as she says it. wonder why?

for a long time this brave child lived with the fear of dying but that did not stop her from living, and though she has great difficulty in breathing, she takes on life head on…

what is endearing and remarkable in this little woman of susbtance is her ability to recognise opportunities and seize them. as the family is extremely poor with just her mom earning, they had to move home each time the landlord wanted to up the rent, and so she never went to school.

When she landed on planet why, she took to her studies like a fish to water, her teacher is amazed at the speed at which she learns.. she went through all the pre-op tests with a smile and never complained.. even when she told us that her brother got a better deal at home, there was no biterness or envy, she just accepted this as a reality she could not change..

Life has not been kind to babli and yet babli has no complaints; she is grateful for what she has, and has the ability to make the best out of everything, however insignificant..

It is time for life to make up to her!

Note: babli will soon be operated upon. all pre-op tests have been done. we are waiting for the date. if all goes well, babli will reintegrate mainstream education in march 2006.