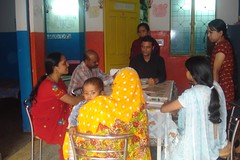 Sunday was the first PTM of the foster care. We were a little apprehensive about whether all the parents would turn up. The room was set up, every child’ school copy was laid out and we waited expectantly.

It was truly heartwarming to see that all parents were on time, some even turned up a hour early.This was perhaps the very first time they were attending a PTM. When everyone was settled, Prabin our stellar house master began the meeting by giving a brief outline of the daily routine and activities. He also showed the proud parents the children’s school books and copies. Then it was time for the parents to share their concerns.

As each parent began to speak, our hearts filled with pride. Nikhil, his father said, was a different boy. When home for the week ends he urged his siblings to complete their homework and chided them for wasting food. Babli’s mom was eager to tell us that Babli now spoke in English with her elder brother and loved sharing stories about her life at the foster care. Vicky’s mom, a normally shy lady, told everyone how happy she was at the change in the behaviour of her son. She had once found him so difficult to manage; now when he was home he not only helped her but scolded his siblings when they were rude to her. Aditya’s mom was delighted at the progress her son was making!

It was indeed a special moment. These parents who had never praised their children were for the very first time lauding them with immense pride and joy. I remembered the day when I had first suggested to these very parents that they send their children to us and there had been a little hesitation and reticence. But all that was gone now.

My mind traveled back to the days when many had expressed their reservations to our foster care programme. One of the concerns many had was that the children would reject their families and become misfits. I never believed that and always held that they would finally turn out to be agents of change. Our little bacchas have proved me right. In the span of a few months they have already starting carrying back messages and making a difference in the lives of their very own. I was overwhelmed.

But the day was not over and more surprises were in store for us. Champa’s mom came late and though she barely speaks Hindi she managed to convey to us that Champa loved the foster care and always wanted to go back. Champa had finally come home.

But there was still more to come. I cannot find the words to express what I felt when Prabin told us that for the very first time Manu had a bathed himself alone thought it had taken him 35 minutes to do so. What a journey it had been but somehow at that moment I felt I had reached home!